Mrs. Flores retirement party is also her 65th birthday to be celebrated. Among the expected guest are the Sarangani DepEd Personnels, LGU’s, co-Teachers of GPNHS, friends and family.

“I still be coming to the school even if my term of service as a teacher ended up.” Mrs. Flores said.

GPNHS Teachers and Staff expressed their greetings through videos which are compiled by ICT Department. It followed with teachers’ dance numbers in the Department of English, Science, Math, & Makabayan. 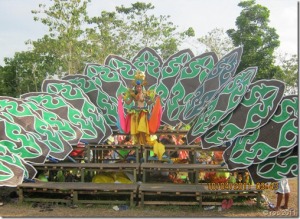 “I am impressed with this year’s performance of every schools. For the next year Lubi-lubi festival, I am increasing the first prize to P200,000.00″. said Victor James C. Yap, Sr., Glan Municipal Mayor.

The thanks giving party of Tribu Padiduanon is set on October 21, 2011, 1:00 pm after the 2nd Grading  Examinations of students.